Make-up for women is a huge business, earning hundreds of millions of dollars every year. Biologists now believe that they have a new understanding of why blush, a product designed to enhance the redness of a woman’s face, has such an appeal: A redder face may indicate that a woman is ovulating, and is therefore at her most fertile. 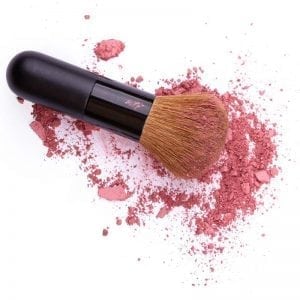 A scientific study, published in the journal PLOS ONE, carefully photographed 22 ovulating women every day for more than a month. To correct for lighting and color distortions, the women were photographed with a special camera. The photographic images were then converted into RGB digital values to exactly measure color levels. A computer software program was written to randomly select an area of each woman’s bare cheek, and this data was compared with measurements of the woman’s luteinizing hormones, a key indicator of fertility.

Although the researchers caution that the difference between the amount of redness in each woman’s face varied only slightly over the course of the study, the scientists were able to establish a direct link between higher levels of facial redness and fertility. Conversely, facial redness levels dropped to their lowest once menstruation began.

Ovulation and female blushing: Is there a connection?

These slight differences in facial color are thought to be indistinguishable to the naked male eye, as the researchers found that the color change was below the standard accepted limit for what a person can notice. Nonetheless, the newly discovered link between facial redness and ovulation is thought to play a vital evolutionary function. Dr. Hannah Rowland of the University of Cambridge, who led the study, stated, “Women don’t advertise ovulation. But they do seem to communicate some information about it, as many studies have known that men rate women as more attractive when they are ovulating.”

Human beings are unusual amongst the mammal kingdom in that individual females ovulate and are fertile at different times. Furthermore, unlike most female mammals which openly advertise their fertility with clear outward signs, human women show no outward indicators when they are ready to conceive. Indeed, many women are not even aware themselves when ovulation has begun, or which times of the month that they are at peak fertility. Some researchers speculate that, once upon a time, the change in facial redness for women was much more distinct, but has since been “dampened” as a way for women to further hide outward signs of their fertility.

“Originally, we thought that facial skin color might be a sign of fertility in women, as it is with primates, but this study shows that men cannot be picking up on these signs,” said Dr. Hannah Rowland. “But we do believe that these shifts in women’s facial redness levels could very well be a small piece of a much bigger puzzle.”

The color red and its signaling effect

All male primates, including human beings, have been shown to be very attracted to the color red. Red make-up, jewelry and even red clothes are sometimes used subconsciously by women as another method to outwardly indicate their fertility. 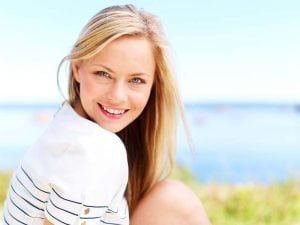 “Even way back in the 1970s, scientists were beginning to explore the idea that natural biological fertility signals, such as redder skin, might be being replaced or enhanced with artificial signals, such as clothing or make-up,” said Dr. Robert Burriss, a psychologist at Northumbria University and co-sponsor of the recent scientific study that measured women’s facial redness levels.

“But if human women once advertised ovulation with noticeably redder faces, it doesn’t appear that they do that anymore.”

Dr. Buriss and Dr. Rowland believe that human women may blush naturally more often when they are in the presence of attractive males as another outward indicator of ovulation and fertility.

“Other research has shown that, when women are in the fertile phase of their menstrual cycle, they are noticeably more flirtatious and show other outward signs like dilated pupils, but this only occurs when they are interacting with, or thinking about, attractive men,” stated Dr. Burriss. “Our mission is to conduct further research to learn if facial redness levels also respond the same way.”

Dr. Rowland and Dr. Burriss originally wanted to pursue research into female facial redness levels more than seven years ago but had to wait until social networks at Cambridge University were sufficiently developed to find enough women to participate in the study.