Home » PCOS May Be an Autoimmune Disorder

Five million women in the U.S. are affected by polycystic ovary syndrome, known as PCOS. With the distressing symptoms of changes in hair growth, hair loss and infertility, it’s no wonder that these patients are eager for any research that brings new information about the disorder. Studies are pointing to autoimmunity as a potential factor of PCOS. While previously unconsidered, autoimmunity is a factor of many chronic diseases, like endometriosis and lupus. How autoimmunity may factor into the development and treatment of PCOS is still being studied, but information is slowly being released regarding this high-stakes subject.

Autoimmune diseases are complex and sometimes seem counterintuitive. The basic idea is that when a body produces an autoimmune response, it unknowingly attacks itself. This attack can have a variety of effects, but it is common that it destroys otherwise healthy tissue. Inflammation intrinsic to PCOS causes the exposure of antigens that cause antinuclear antibodies (ANAs) to be produced, and ANAs are typically an indication of the presence of autoimmunity. In an autoimmune response, the body has found inside itself something that it believes to be an “outsider” and then attacks it like it would a virus or bacteria. If PCOS is the result of an autoimmune response, then it is possible that patients may benefit from treatments that resemble the treatments for other autoimmune diseases, such as Hashimoto’s thyroiditis and rheumatoid arthritis. This avenue is being explored by top research doctors.

The Gut’s Role in Autoimmune Diseases

Many experts in the field point to the gut as the source of autoimmunity. The condition known as “leaky gut” is beginning to be recognized by the medical community as a source of inflammation and autoimmune response. In this condition, the intestines, through a lack of good bacteria and a build of bad bacteria, begin to produce small openings in the intestinal wall. Small particles of partially digested food wiggle their way through these openings and into the rest of the body. The organs and tissues outside of the gastrointestinal system do not recognize this food as “food.” Instead, they identify it as a threat and begin attacking it. This creates an inflammatory response, causing various symptoms, including pain.

Theories Regarding How Autoimmunity Develops in PCOS Patients 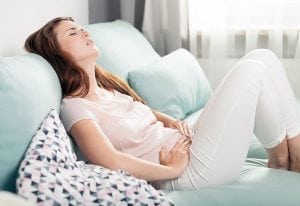 There are a variety of theories as to how a PCOS patient’s body might be creating an autoimmune response. One theory suggests that a GnRH (gonadotropin-releasing hormone) receptor begins to “think” that the GnRH it’s supposed to receive is foreign to it. The receptor then signals the body to attack this “foreign” object with antibodies. Another theory suggests that low progesterone levels (typical of PCOS) cause the immune system to overproduce estrogen, which leads to the production of antibodies. A different study contends that lymphoid cells may mistakenly release antigens in the case of trauma to the body and thereby initiate an autoimmune disease. This theory has been used to explain disease development in autoimmune conditions, like celiac disease, for decades. In another case, the theory is that certain types of T cells known as “Tregs” are employed in the prevention of autoimmunity and the regulation of the immune system. If these cells decrease in production, then the body will not be able to prevent an autoimmune response. For a more scientific explanation of these theories and how they might work inside your body, check out this study.

The jury is still out on how this development may affect treatment of PCOS. However, further understanding of any disease typically leads to developments in treatment and improvements in the lives of patients. We can expect that the study of autoimmunity in PCOS will eventually lead to advances in this field and the production of better care regimens. If you’re concerned about the way autoimmunity may play a factor in your PCOS, then discuss this with your doctor. Your doctor will be able to tell you whether these developments will change any part of your treatment at this time. Otherwise, there have been many books published on the subject of autoimmunity that may help you better understand autoimmunity and its role in disease development.