Home » How the Moon May Influence Reproduction

Can the moon affect fertility? Recent studies have shown enough evidence for scientists to want to learn more about how the moon may influence human reproduction.

While it may seem strange to some, many ancient cultures, from the Mayans to the Greeks, viewed the moon as feminine and associated it with fertility. Initial beliefs were that the comparison related only to the similar cycles of the moon and the human menstrual cycle. Studies show the possibility of a more complex connection than cycle lengths. The findings offer hope for anyone interested in understanding their bodies better and having more control over their fertility.

Author Louise Lacey coined the term “lunaception” in the 1970s in writings about how women could use the moon as a method of birth control. The idea was unique but based on general scientific beliefs.

Evolution shows that life on earth evolved from the ocean. Scientists have long known that the reproduction of crustaceans and plankton synchronizes with the moon. To believe that the moon may play a role in human fertility is a concept that most experts have thought possible for generations. 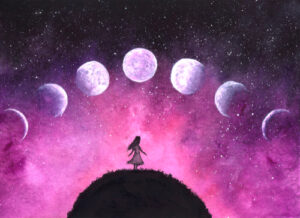 A study of the subject included birth records from New York City from 1968 of 140,000 live births. The researchers categorized all the details from these records. The results showed connections between menstrual cycles, fertility, and light occurring during the moon phases. The data showed enough promise to draw the interest of other scientists who would continue the research.

Studies from the last half century have consistently offered similar findings. The research revealed frequent enough connections between the start of menstruation with full and new moons to be beyond chance. Scientists believe it could relate to electromagnetic energy, or more popularly believed, to the light provided by the moon.

Studies revealed that women 35 and younger were more likely to have their reproduction cycles sync with the moon. The data showed what many believed; younger women (usually the most fertile) have a greater sensitivity to the natural effects. Rural women were the test subjects in many of the studies. The experts believe these women were less exposed to artificial lighting than women in urban areas and more sensitive to the changes in the light of the moon.

The connection remains unproven, however, as other researchers submit data they believe show no correlation between lunar phases and reproductive cycles in humans.

Benefits of the Information

Many women appear to experience rising estrogen levels as the full moon approaches and are more likely to ovulate within days before or after a full moon. Estrogen levels declined, and menstruation began more often around a new moon. The researchers believed this occurred because of the decreasing illumination after a full moon and the increased darkness during the new moon. Spending more time in the moonlight and self-checking ovulation the days before and after a full moon offer no risks to women who wish to become pregnant and may help achieve the desired goal.

The full effects of the moon on reproduction are unknown, but studies will continue because of the possible connections already discovered. As science explores the relationship between menstruation and moon cycles, people can put the existing data to use. Those who want to become pregnant can schedule fertility treatments or other methods according to lunar phases.